If you liked it, please share and spread the love :)
Views: 332
“Death be not proud, though some have called thee

Mighty and dreadful, for, thou art not soe,

For, those, whom thou think’st, thou dost overthrow
Die not, poore death, nor yet canst thou kill mee.
One short sleepe past, wee wake eternally,

And death shall be no more; death, thou shalt die…. “

It was his third cardiac arrest somewhere in October.His pupils were dilated  and non reacting.His GCS  was bordering on 4 to 5,all hinting towards poor neurological recovery and a vegetative state.There was unspelt understanding in doctors…DNR ; because there was no hope.And that is exactly when divine interference intervened and  left us all baffled . There is life in death and death in life and whatever medicine rules say,somewhere it falters,because something intangible, inscrutable is beyond medical full stop and there stands wonder,hope and miracle!!!

It was on July the four he was admitted in ICU as a  case of GBS.Immunoglobulins were started immediately but there was not much improvement.He had to suffer in coming days,a rare and unforgiving complication of GBS..Respiratory Paralysis.His respiratory muscles were involved and he could not breathe on his own.He was intubated and put on ventilator in month of July.With coming days his situation only worsened with evanescent hopes of his recovery.

Then one day he had Cardiac arrest.Frantic attempts were made to resuscitate him,CPR,ADRENALINE,ATROPINE,DEFIB…
His heart responded,his pulse came back,may be his time on earth wasn’t done yet.There was more to his fragile essence and being.
Trials to wean him from ventilator were given but of no avail.His weakness showed no improvement unlike other cases where there is almost complete recovery.
As days passed,our hopes dimmed and his parents resolve only strengthened to see him on road to recovery.
Medicine at times becomes too scientific and mechanical and absurd and looks with disdain at anything beyond its anticipated course of response…There lies the naivety…
His parents would day in and day out take care of their child,dress him,feed him and sing gurbani into his ears.

Any time during night,his father would be looking at his child face and whispering sweet nothings in his ear.He never gave himself reason to believe that his son wont be alright.

As doctors were less sure of recovery of Parvinder,his parents resolve only increased manifold.
Then one day he got second cardiac arrest.He was again resuscitated but this time his GCS was bordering on 5 or 6 with dilated non reacting pupils.The road to recovery looked like a dark abyss.

His third cardiac arrest was when i was on ICU duty.I so vividly remember it.It was 1 am in morning.I was checking with some patient when nurse tells me that his ECG is not coming and there is no pulse.I rush madly towards his bed and start CPR..i yell at sister to get adrenaline,atropine and call senior doctor on duty.He gets his pulse,goes into Ventricular tachycardia,shock given and one time his fragile and dangling life comes forth.Doctors explained to his parents that his prognosis is very bad and he may not survive.His parents being illiterate nodded there heads but there hearts refused to believe that non reacting pupils could defeat their purpose of getting their child back to life…
There was a hush hush silence and unspoken pact of not to resuscitate him aggressively next time..

That is when things stated to change for good..
His parents hard-work started to pay,prayers were heard and medicine had to bow before supreme intelligence of almighty and undefined realms of consciousness and splendid unfolding of mystique of universe…

One fine day would tell his name,his schools name and would say GOOD MORNING to our HOD on rounds…

His story encompasses 6 months and there is so much to write and there few words cant do justice to it but the idea is to write to understand,
Are we the ones who can decide with full surety that this person cannot come back to life?

What would have happened if we hadn’t resuscitated parvinder every time?

There is divinity beyond the medicine…
Few months passed and with hard work of his parents,doctors,ICU staff..D day arrived

On 4th January,he was finally discharged from ICU after experiencing life,death and everything in between in these 6 months..

On morning rounds he said to HOD,
“MUJHE GHAR JANA HAIN.AAPNE TO ICU KO MERA GHAR BANA DIYA.MUJHE MERE BHAI SE MILNA HAIN..MUJHE SCHOOL JANA HAIN…He said, “THANK YOU SO MUCH ..naahe THANK YOU VERY MUCH
There was a smile, a deep smile of satisfaction,of witnessing a miracle,of unalloyed happiness on everyone’s face..
HOD told him; ghar jakar chalega naa?
He responded,main to dance karungaa..
“I AM A DISCO DANCER”
everyone burst into laughter,with eyes in awe,and gazing in wonder at life which snatched itself from clutches of death…

And so parvinder left ICU on morning of 21 JANUARY,almost everyone came to bid him adieu,his bed mates,other doctors in department,nursing staff and rest…..

And there was an emptiness after he left,but a deep rooted happiness entrenched everywhere…
He left and taught us two things
Never give up on life…
There is nothing beyond God’s will….. 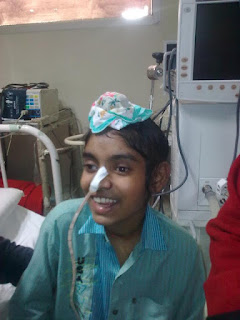