I got up in the morning and after having bournvita milk started my day at 5.30 am. I reached campsite by 3 pm. It takes 10 to 12 hours to reach Budhi from Gala. Last person from our batch reached by 5.30 pm. It was drizzling and I had my breakfast at 8 am. It is one of the longest days and also most beautiful. After starting from Gala, after 2 kms, one has to descend 4444 steps till the base of ferocious river Kali. Going down 4444 steps and narrow patches around river Kali has to be done on foot by all yatris. 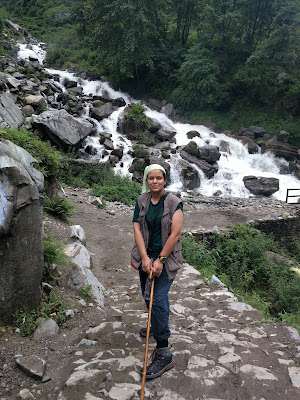 After reaching base of river Kali I reached breakfast point. I had aloo nutree and pooris and ventured ahead with my porter. It was raining like crazy. One has to cross numerous waterfalls whose flow increases in rainy season and thankfully my porter was carrying an umbrella. It is not a bad idea to carry an umbrella during rainy season. Poncho also comes handy.